Dr. Nou! to the rescue This story was first published in Huisgenoot, 22 October 2020. Written by Jody-Lynn Taylor.

For as long as she can remember, she has been bullied about her appearance. The condition known as Turner syndrome had left her with gaps between her teeth, dark circles under her eyes and a problem skin – and she was mocked for it mercilessly.

“It had a major impact on my life and in many ways held me back in what could have been a wonderful first 30 years of my life,” a Pretoria woman called Nadia reveals in the second season of the VIA (DStv 147) reality series, Dr. Nou!

But, thanks to the caring and competent hands of two exceptional doctors, Nadia now likes the person she sees in the mirror for the first time. She is tackling life with new self-confidence and hopes that she will finally find a romantic partner.

Nadia and the viewers aren’t the only people who are deeply moved by the moment when her outward appearance finally reflects the beauty she possesses inside. Jurgens Grové and Riekie Smit, the doctors participating in the series, experience their patients’ emotional reaction to their transformation as equally touching and fulfilling.

Because it is more than appearance that is restored by the cosmetic and dental procedures carried out by the Dr. Nou! team; their patients’ emotional wounds are healed and replaced with self-worth and hope.

“It is so many emotions in a single moment, and that makes it so special to be part of it,” says Riekie (43) from Pretoria. Her healing work is a dream come true, she says.

Her father, Jan van Wyk (70), had a pharmacy where she spent a lot of time as a child. She always wanted to read the fine print on every medicine bottle. And after 20 years in her cosmetic practice she still loves improving people’s lives. “I am fanatical about the medical field, anatomy, research and everything that goes with it.”

Jurgens (63), the “other half” of Dr. Nou!, is from Bryanston, Johannesburg, and admits he doesn’t really know why he decided to devote his life to dentistry. “Back then I asked my classmates and was consoled by the fact that most of them also didn’t know why they had decided to study dentistry.”

He has already been in the profession for 40 years, and it is his goal to make dentistry affordable for families and individuals. “My focus is on aesthetic dentistry, where you can make people’s smiles look better and give them more self-confidence.”

Some viewers may have only gotten to know Jurgens and Riekie in the first season of Dr. Nou!, but they were also a team in 2014, in the weight loss series Maatband on kykNET (DStv 144). “I enjoy working with Riekie and admire her, actually. She is very competent, active, she takes the lead. I have a lot of respect for her,” Jurgens says. 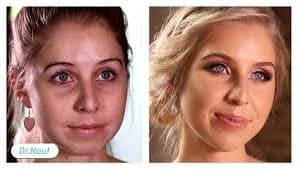 Riekie also enjoys working with Jurgens. “It is because he understands what I do, and I understand his work. Your teeth are a major part of the shape of your face, and it is always better that he works on the teeth first, before I work on the skin or lips,” she says.

Riekie believes she has the best job in the world because she makes people healthier and happier. Patients who turn to her practice in Montana for help, usually have severe skin problems such as acne, sun damage, birth marks and scars.

Some also seek help with wrinkles, sagging cheeks or lips and weight problems. “It is everything that bothers you about your appearance and impacts your self-image. I don’t do beauty treatments at all; that is a completely different field. I only perform medical procedures and consultations for cosmetic problems,” Riekie explains.

These two doctors don’t find it easy to single out highlights from their VIA series. “There were highlights in every episode we filmed. Especially when you see each person’s face when they look at themselves with so much gratitude,” Riekie says.

Nadia touched them both deeply. Her condition, Turner syndrome, can impact your height, the shape of your face and neck, your teeth and even some organs.

In the series, Nadia tells the presenter, Henck Conrey (32), how traumatic the first 30 years of her life were. “I was severely bullied by from my closest friends to complete strangers,” she says. But according to Riekie, Nadia is a bubbly person who tackles life with a smile and tons of courage. “Her treatments worked well to give her even more self-confidence.”

Her emotional reaction was what moved Jurgens. “You could tell that her self-confidence had taken a knock and that with this drastic change you had given her the confidence to speak and to look people in the eye.” Then there was Dirk, who was entered by his wife Karen. “He underwent a remarkable change,” Jurgens says about his transformation in the series. “With Dirk you think in the beginning that there is nothing that can be done for him. But then you are quite proud when you see the end result.”

The need to temporarily suspend filming the series due to lockdown presented a challenge. As a result the treatments undergone by some of the participants had to be repeated. One kind of treatment for example has to be repeated every five to six months, Riekie explains. “Fortunately other treatments last much longer.”

Both doctors look at themselves with a critical eye when they watch themselves on television on Thursday evenings, usually in the company of their families. “My hair sometimes looks strange, or I’ll say something wrong,” says Riekie. “It is really the case that television makes you look fatter and bigger. Many people who see me in real life for the first time tell me that I am much shorter and smaller than they expected. Or they ask whether I have lost weight.”

Sometimes she won’t let her children, ­Alicia (17), Jonathan (15) and Georgia (10), watch an episode where she knows she made mistakes. “Like me they are very critical.” But in the end everyone has a good laugh at her slip-ups.

Jurgens says he watches the series with his wife, Agneta (61). “She often tells me she can barely believe they are the same people at the end of the programme.”

And that is what it is all about for them, he says. “We only have a short time on earth. So if you can use that time to change and improve people’s lives, it makes you feel good.”

Win a makeover session with Huisgenoot, Via and Dr. Nou! Win a makeover session valued at between R100 000 and R200 000 depending on the treatments required, sponsored by VIA and Dr. Nou!

Send an email to [email protected]­genoot.com with a photograph and your story explaining why you believe you deserve this transformation. The email should reach us before or on 6 November, and the winner will be chosen by 13 November. The makeover session and episode will be filmed in Johannesburg and the winner will be responsible for the costs of travel arrangements. Terms and conditions (as set out at viatv.co.­za) apply. The makeover session for the Huisgenoot winner will be filmed as a special episode of Dr. Nou! and broadcast at 18:00 on 14 December on VIA (DStv 147). Remember, if you enter you have to be prepared to take part in this episode.

How to watch Dr. Nou online

DStv offers an online streaming service for all* DStv subscribers. Watch the channels you watch on your decoder at home, but on the Internet! Sign up at now.dstv.com on your laptop and start watching today.

Check your Ster-Status with VIA (DStv 147) this October

80 ladies, 1 goal and 1 winner. Who’ll be crowned Ster-Status S2 superstar and break into the world of entertainment?

Finding true love in this VIA science experiment