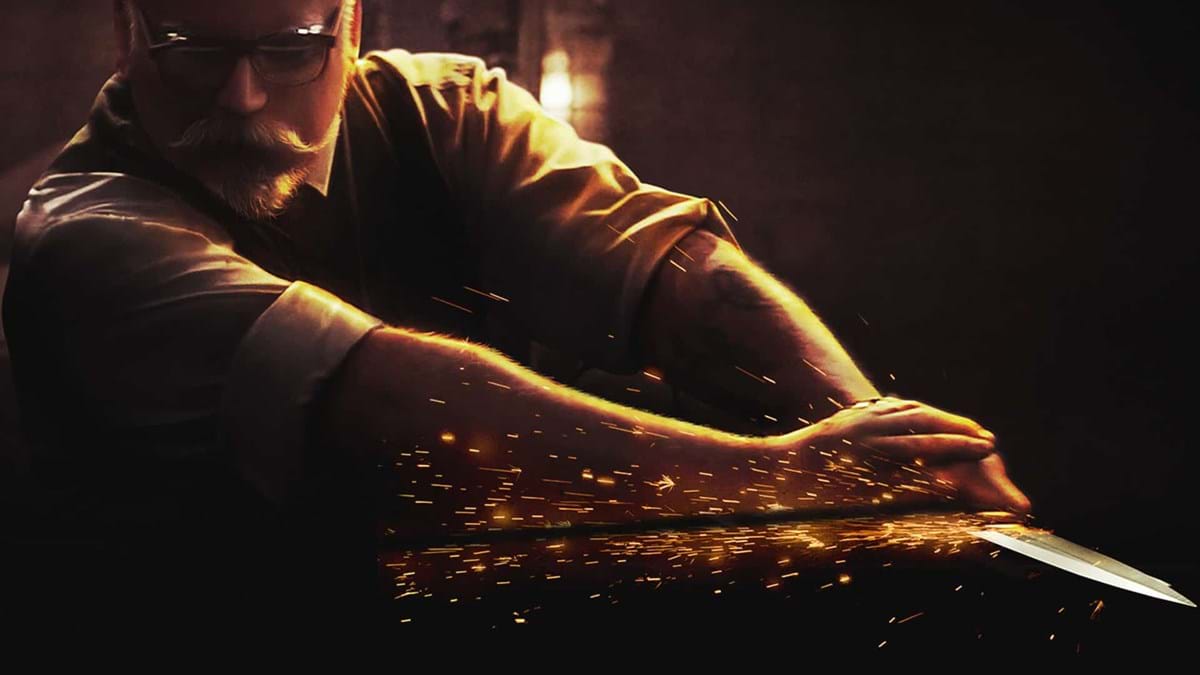 Former Army Ranger Wil Willis returns to our screens as host of the epic battle of the bladesmiths on HISTORY Channel (186) in the last week of February. Along with expert guest judges Doug Marcaida, David Baker, Ben Abbott and J. Neilson, Wil puts the skills of a whole new batch of hammer-swinging hopefuls to the ultimate test to award the Forged in Fire winner their $10 000 prize. This year, challengers will once again sweat it out in the extreme temperatures and pressure of The Forge to produce the winning weapon, and series producers have managed to make their already near-impossible tasks even more challenging.

Famously (and accurately) described as “Bake Off, but with battle axes” by The Guardian, the show has had history buffs and weapons enthusiasts glued to their screens for six awesome seasons. As if the competition wasn’t tough enough in the previous seasons, contestants in season seven now see the time allowed for their crafting slashed in both the second and final rounds. While the reduced time for the second round is not thought to have that much of an effect on the outcomes, the fact that the remaining two bladesmiths are now given four as opposed to five days at home to craft the ultimate replica of the episode’s chosen historic edged weapon, has fans sitting up and paying attention. The loss of a whole day means there’s even less chance of starting over should their first effort fail – but as we’ve seen time and time again, it’s in the fires of adversity that the truest blades are forged. Over the show’s five-year history, we’ve seen some of the most famous deadly bladed weapons from all over the world recreated under the toughest conditions. From the keenest of katanas to razor-sharp rapiers, the magic of seeing these masters of metal hammer away at shapeless chunks of steel to produce some of the most famous blades in history is a large part of the show’s winning formula. In season seven we can look forward to legendary weapons like the mythological Medusa-slaying Sword of Perseus and one of history’s most unique hunting weapons; the Rock-Throwing Crossbow. South Africans can look forward to seeing the recreation of one of our own pieces of history when competitors aim at replicating a deadly Zulu War Axe later in the season. Judge Doug Marcaida’s catch phrase "It will kill", which he utters upon successfully disembowelling or beheading the hapless test dummies with the final two contestants’ weapons, has become the show’s unofficial fan-favourite tag-line over the years. His exaggerated pronunciation is not, however, just a dramatic touch on his part.

According to Marcaida, the phrase is actually "it will KEAL," an acronym which he created himself from the slogan "Keep Everyone Alive." Marcaida and the showrunners as well are aware of the show’s family appeal, and his message is meant to convey the fact that these deadly and dangerous weapons are designed and intended to save lives – and not perpetrate senseless violence.